Music Aid was launched in 1998 with some of the biggest names in music and media at an event attended by over 100,000 people in London. USA Today described Music Aid as "one of the most important new launches in music and media" and awarded the new website at musicaid.org a prestigious Website Of The Year Award. Since then Music Aid has worked with and partnered with international organizations including The United Nations UNV program, the BBC, NetAid, the Al Gore Live Earth event and many others. 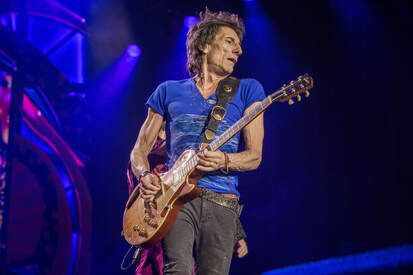 Ronnie Wood
Many famous names were involved in the Music Aid launch including Rolling Stone Ronnie Wood who donated his own artwork in support. Funds were raised from the sale of music memorabilia, original artworks and signed guitars and album covers from Paul McCartney, John Lee Hooker, Oasis, Prince, Eric Clapton, Bob Dylan, Mick Jagger, Bono and many others.

The launch event (also promoted as "The Art of Music Festival") was sponsored by AOL and Tower Records and Whiteley´s of London and it took over an entire floor of the large Whiteley's center in Bayswater, central London. It ran for seven days and was attended by over 100,000 people who enjoyed a week of art exhibits, daily live music and dance shows.
MUSIC AID TODAY
Projects in 2020  include the launch of the annual World Concert Day international event which took place for the first time on April 26. During this event thousands of musicians and fans raised funds for medical causes and other charities during the Covid-19 Global Pandemic. Other current projects include the Music Aid 2020 International Music Awards and the launch of a non-profit record label in association with major international organizations and charities. July 2020 sees the launch of the new Music Aid App (at musicaid.app) - a charity non profit music resource and store with millions of tracks in partnership with iTunes and Amazon.com with proceeds supporting good causes.

PARTNERS AND CAUSES
Music Aid has partnered with many charities and causes and has raised funds to support them. In addition it has provided resources and educational support to many thousands of musicians; it has provided schooling and aid to poor village children in SE Asia; it was an official project manager with The United Nations UNV Project and in this capacity managed hundreds of UNV volunteers worldwide with the United Nations and Net Aid; it distributed free musical instruments through the "Instrument Amnesty" Project together with The BBC; it has helped and supported thousands of people wishing to enter the music industry worldwide; it founded and launched the SCO International Song Copyright Organization (SongCopyright.org); it produced and organized the Music Aid 2006, Music Aid 2007 and Music Aid 2009 and Music Aid 2017 International Music Awards events where good causes were supported and where over $500,000 in prizes were shared among participants. Music Aid has also promoted and supported many charity music benefit events including Al Gore's Live Earth Event and supported other aid projects on four continents. Music Aid is committed to improving lives and supporting those in need, helping vulnerable children, and fighting and raising awareness of climate change and pollution, especially air pollution: the main cause of disease and death in the world today.