ABOUT MUSIC AID
Music Aid is an organization based on the simple mission of "making the world a better place through music". It launched in 1998 with support from some of the biggest names in music and media at an event attended by over 100,000 people in central London. USA Today described this as "one of the most important new launches in music and media" and awarded musicaid.org Website Of The Year Award. Since then Music Aid has worked with The United Nations, the BBC, Net Aid, the Al Gore Live Earth event and many other events and organizations and partners with some of the world´s biggest brands to support good causes.

BACKGROUND
The organization was formed in November 1997 and registered the following year with the Charities Commission as a UK government registered international charity with the registered name of The World Music Foundation (Charity #1071669). It operated as a registered charity for nearly seven years before changing status in 2005 to an independent international social enterprise, using the same organizational model as Oxfam International, The Red Cross, One.org, and Bono´s (Product)Red. The ideas for the organization grew from conversations between Music Aid founder Alan John Hardman and musician Carlos Santana at Rock In Rio 2, backstage at the Maracaná Stadium in Rio de Janeiro, Brazil. Both men were passionate about music and were discussing ways that music could be used for good, and they shared many ideas on what could be achieved, what they planned for the future, how to do this and what direction they could take. Carlos returned to the USA and formed the Milagro Foundation, and Alan returned to London to form Music Aid International.

LAUNCH AND MISSION
The Music Aid launch event was impressive and lasted for seven days, with a festival that incorporated the entire third floor and many other sections of the huge Whiteley´s complex in central London. The launch was sponsored by Whiteley´s, AOL and Tower Records and supported by Rolling Stone Ronnie Wood and many celebrities from music and film with displays of guitars and album covers signed by Paul McCartney, Pink Floyd, Oasis, Nirvana, Bono and many others. Daily live music and dance performances, artwork from Andy Warhol and John Lennon and other major artists, and visitors numbering over 100,000 ensured a great start for the new charity. Many famous celebrities and musicians were spotted wandering around the exhibitions, mingling with the crowds. Some personally brought along items to donate, sell and display, and others, like Film Director Peter Howitt, purchased items from other supporters (Peter for example bought rare Beatles photos from Paul McCartney´s sister Mary). Note: Music Aid hopes to be involved with Peter´s new 2021 movie about the Covid-19 pandemic - "Lock Down".

Music Aid´s mission is clear and direct: "To make the world a better place through music". The funds raised from the launch event helped children in need and provided hundreds of poor village children in SE Asia with school shoes (a main reason many children were not attending school in the region was because they could not afford the mandatory black school shoes demanded by the local schools). Additional help with school fees, uniforms, school bags, books etc allowed many children to start school for the first time and supported others in difficulty to continue attending. In 2021 Music Aid has plans to return to the same region to establish a permanent local center to continue this work and it will be named in honour of an original Music Aid local team member who lost her life in the GermanWings Flight 9525 Barcelona / Dusseldorf airline tragedy. Other projects have included working with street children and their homeless parents in Brazil and the Philippines, partnerships with the United Nations Volunteers providing support for thousands of United Nations and Net Aid volunteers working in poverty relief worldwide, partnerships with the BBC and others providing musical instruments to underprivileged children, promotions with the Al Gore Live Earth event, the founding and launch of the annual World Concert Day benefit event and much more. In 2021 Music Aid launches a new global project to provide high quality free music education, teachers and resources to underprivileged children and adults in classes, schools and communities worldwide. 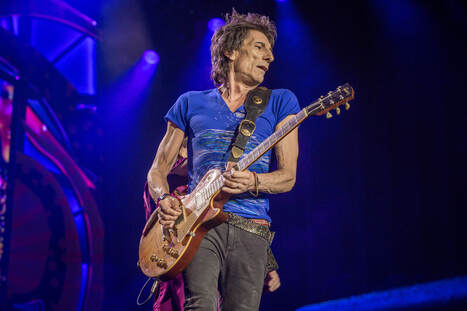 Ronnie Wood
Many famous names were involved in the Music Aid launch including Rolling Stone Ronnie Wood who donated his own artwork in support. Funds were raised from the sale of music memorabilia, original artworks and signed guitars and album covers from Paul McCartney, John Lee Hooker, Oasis, Prince, Eric Clapton, Bob Dylan, Mick Jagger, Bono and many others.

The launch event was sponsored by AOL, Tower Records and Whiteley´s of London and occupied an entire floor of the Whiteley's center in central London. It ran for seven days and was attended by over 100,000 people who enjoyed a week of art exhibits, daily live music and dance shows.
MUSIC AID TODAY
2020 saw the launch of Music Aid´s annual World Concert Day international event which took place for the first time on April 26. During this event thousands of musicians and fans raised funds for medical causes and other charities during the height of the Covid-19 Global Pandemic. Other projects include a non-profit record label, and the musicaid.app - a non profit music resource and music store in partnership with Apple and Amazon.com and other industry partners with all proceeds supporting good causes. An educational project - The Music Aid International Academy of Music - is currently in start up stages to provide free music education to underprivileged children in classes, schools and poor communities worldwide. There is also a Music Aid TV project to provide free video music resources and lessons to musicians and students and it will also raise funds for charities with a music entertainment video channel.

PARTNERS AND CAUSES
Music Aid has partnered with many charities and causes and has raised funds to support them. It also partners with music industry brands and events: for example the Music Aid Music Store App partners with iTunes, Amazon and Apple Music among others. A number of international music events and businesses such as The UK Songwriting Contest, The International Songwriting Awards and The Song Copyright Organization also partner with Music Aid as fundraisers and donors. Through these partnerships Music Aid has provided resources and educational support to many thousands of musicians; provided schooling and aid to poor village children in SE Asia; was an official project manager with The United Nations UNV Project and in this capacity managed hundreds of UNV volunteers worldwide with the United Nations and Net Aid; it distributed free musical instruments through the "Instrument Amnesty" Project together with The BBC; it has helped and supported thousands of people wishing to enter the music industry worldwide; it founded and launched the SCO International Song Copyright Organization (SongCopyright.org); produced and organized the Music Aid 2006, Music Aid 2007 and Music Aid 2009, Music Aid 2017 and Music Aid 2020 International Music Awards events where over $500,000 in prizes have been shared among participants. Music Aid has also promoted and supported many charity music benefit events including Al Gore's Live Earth Event and supported other aid projects on four continents. Music Aid is committed to improving lives and supporting those in need, helping vulnerable children, and fighting and raising awareness of climate change and pollution, especially air pollution. In 2021 Music Aid launches a new global project to provide high quality free music education to over 100,000 underprivileged children and adults in classes, schools and underprivileged communities worldwide.